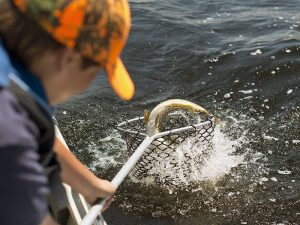 Saginaw Bay walleye were caught off Pinconning in 30 feet and off Linwood in 18 to 24 feet with crawlers and crankbaits. Fish also were found near the old Dumping Grounds in 22 feet and off Finn Road in 20 feet when using crawlers. Windy conditions slowed the walleye action, with only a few found in 16 feet along the Slot. Due to the high number of freshwater drum and catfish being caught, anglers now are switching to Hot-n-Tots, spoons, flicker shad or artificial baits instead of a crawler harness. Walleye were caught off Caseville when trolling a harness or body bait out near the Charity Islands.

Au Gres Area continues to have good walleye fishing in 30 to 40 feet with crawlers, spoons and crankbaits. Fish have been found north of the Charity Islands and as far south as the Pinconning area.

Outer Saginaw Bay
Grindstone City a couple walleye were caught straight out of the harbor and northwest in 20 to 30 feet when trolling both crawlers and crankbaits.

Oscoda Trout, salmon and walleye were caught by those trolling spoons or flies and dodgers with spin-glo’s between Au Sable Point and 3 Mile Park in 70 to 140 feet. Fish were suspended in the top 60 feet or near the bottom. Purple, red, white, orange and blue were good colors. A couple walleye were suspended in 50 to 70 feet. Pier anglers caught smallmouth, freshwater drum, channel cats and the occasional walleye.

Port Austin Walleye are showing up in front of the harbor and around the lighthouse in 15 to 25 feet, including some limit catches. A crawler harness is working best. Pier anglers had no luck.

Tawas Area a good number of walleyes, including some limits, were caught straight off the point with crawlers, spoons and crank baits in 50 to 70 feet. Brown trout and steelhead were caught a bit deeper in 80 feet or more with spoons.