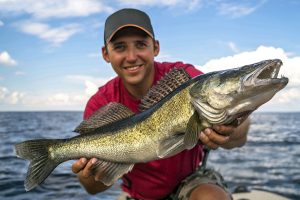 Saginaw Bay water levels were still very high. Shore anglers off Linwood caught smallmouth bass on tube jigs or when casting spinners. Walleye were taken at the Spark Plug when trolling spoons, crank baits or a crawler harness in 20 to 23 feet and off Finn Road in three to 14 feet with a crawler harness. Off Quanicassee, fish were caught in 10 feet or less and from the southern tip of the Slot to Sebewaing in 12 to 18 feet with a few limit catches reported. A crawler harness was best, but body baits also worked. Orange and purple were good colors. Channel cats were caught in the shallow at night with a crawler. Large and smallmouth bass were caught near shore from Sebewaing to Wildfowl Bay with artificial baits. Some nice pike were also caught. Those bowfishing found carp, gar and goldfish however the deeper water made it difficult to see them.

Au Gres Area walleye were taken on a crawler harness or body bait in 25 to 30 feet from Point Lookout to Point Au Gres. A few limits were reported. Those launching out of the Pine River or Eagle Bay Marina caught walleye between the Rifle River and Pinconning in 10 to 12 feet. Incidental catches of jumbo perch, catfish or freshwater drum were also reported.

Oscoda anglers trolling spoons or spin-glo’s with attractors caught lake trout in 40 to 70 feet between Three Mile Park and Au Sable Point. Purple, green, black, and glow were good colors. The lake trout were feeding on goby and sticklebacks. Walleye were caught on body baits in the evening. The odd brown trout was caught by pier anglers still-fishing with minnows.

Port Austin anglers running crank baits in 15 to 25 feet caught walleye west of the harbor. Smallmouth bass were caught in the Pinnebog River and near the mouth with crawlers or casting tube baits.

Tawas Area Chinook and lake trout were taken on spoons in 50 to 60 feet near Tawas Point. A couple walleye were taken on body baits in 20 to 25 feet near the artificial reef. Pier anglers caught smallmouth bass, freshwater drum and catfish when jigging or still-fishing with crawlers and casting body baits. Lots of carp inside the marina.