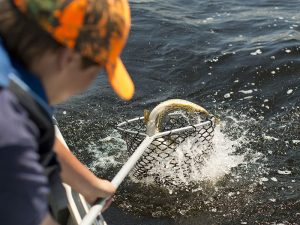 Bay City Area walleye were caught when trolling crawlers near the State Park in 10 to 12 feet and near Sailboat Buoy-F with crawlers and spoons.

Oscoda lake trout, steelhead and a couple pink salmon were caught in 90 to 120 feet or deeper at 140 to 190 feet. Lake trout were taken on spoons and meat rigs with attractors in the bottom 25 feet, but a few were up higher. Steelhead, pink salmon and a couple suspended walleye were taken above the thermocline on orange, chartreuse, chrome or black spoons. Pier anglers caught walleye in the early morning or evening when casting body baits or still fishing crawlers. Freshwater drum, smallmouth bass, rock bass and a few decent channel cats were also taken on crawlers.

Port Austin had reports of walleye being caught around the lighthouse when trolling a crawler harness.

Tawas Area walleye anglers were trolling crawlers, crank baits and spoons out past Tawas Pt. and south to the Charity Islands in 20 to 35 feet. Most are getting fish including some limit catches. A few lake trout were taken on spoons in 60 to 70 feet. Pier anglers caught walleye and smallmouth bass when casting body baits.

We bring you this oldie, but goodie fishing tip from 2014. Courtesy of Seth Herbst, the Aquatic Species and Regulatory Affairs Manager out of Lansing.

In many of Michigan’s lakes walleye can be a rather elusive sport fish, making the quest for their tasty fillets difficult at times throughout the year.

Walleye are predators that eat a wide range of small baitfish like yellow perch and various minnows, which logically has many anglers targeting these fish with minnows and crank baits. However, walleye also feed on aquatic insects when they are available and using crawlers on crawler harnesses can be an effective technique for working towards a limit.

Mid-summer is a time of year when walleye in many lakes will typically be in depths ranging from 20 to 35 feet where they are feeding on insects or baitfish. During these feeding periods many walleye will be suspended in the water column and trolling a crawler harness at low speeds can be an effective way of hooking these elusive fish.

Be sure to check in with your local management units about local fishing opportunities to catch these delicious toothy critters!