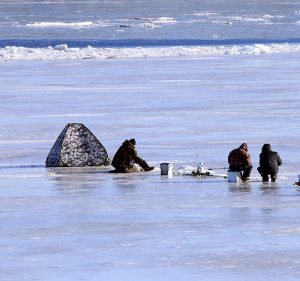 Saginaw Bay on the west side there are at least five open pockets of water and machines have gone in, so extreme caution needs to be used. There is open water straight out from Linwood, an area south and a little east of the “Black Hole,” up near Pinconning, off Cody Esty Road, and straight out from Whites Beach. On the east side there is open water off Callahan Road. Cracks are everywhere so anglers need to use extreme caution as the pressure cracks are changing depending on wind direction and speed. There is a lot of rough ice, jagged cracks and large snowdrifts making travel much more difficult, especially for quads.

A couple walleye were caught off Linwood Road in 22 feet and yellow perch were caught in 3 to 4 feet. Near Pinconning, pike were speared in 5 feet. Walleye were also caught in the Blackhole off Erickson Road. On the east side, walleye were caught about nine miles out from Finn Road in 23 feet. Yellow perch are finally starting to show up at Vanderbilt Park and were caught in 8 to 10 feet. Pike were speared in 4 to 6 feet. Perch fishing was inconsistent along the east side as anglers are sorting through a lot of small ones between Sebewaing and Bay Port. Fish were seen in Wildfowl Bay, but the bigger ones did not want to bite. No word on walleye, pike, or lake trout.

Au Gres Area small walleye along with the occasional keeper were caught on lures and jigs with minnows in 8 to 10 feet. Perch were caught along the south side of the breakwall. Those heading out from Booth Road and Santiago Road caught walleye and whitefish near Pt. Au Gres with lures and jigs tipped with minnows in 10 to 20 feet. A few limit catches of perch came in from Hale Road and Sagatoo Road in the Standish area when using jack hooks or jigs with minnows in 5 to 12 feet. Pike fishing at Northport Marina was slow. Eagle Bay Marina was producing pike along with small bluegills and crappie.

Tawas Area fishing has been slow with a few small perch caught on minnows or wax worms in 10 to 14 feet. A couple walleye and burbot were caught out near the artificial reef with lures or jigs tipped with minnows in 14 to 20 feet.

Don’t want to sit on the ice looking for trout? Then gear up for the open-water season! Find information about Michigan’s trout species.

Continue to use caution. Toward the end of the season ice becomes soft. Although it may still be more than a foot thick, it might not be strong enough to hold someone safely. Never go out alone, take a cell phone, check the ice ahead of you with a spud and pay attention to the weather. For more safety tips visit Michigan.gov/IceSafety.