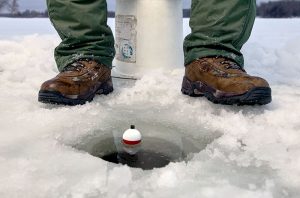 Saginaw Bay lots of anglers have been out, but catch rates were slow. There is a large pressure crack roughly a mile to a mile and a half offshore that runs from the state park up past Linwood toward Pinconning. The crack has been a trouble spot for those trying to cross it, especially for quads, because of the pockets of open water. Walleye were caught near Buoy #1 in 30 feet, at the Spark Plug in 20 to 30 feet and near the Black Hole in 26 feet. Perch were found off the end of Linwood Road in 4 feet, near the range light at the mouth of the Saginaw River and up to the Pine River area when using perch rigs with minnows. Reports vary day to day, but those fishing shallow and staying away from the crowds seem to do better. On the east side, perch fishing activity was limited at Vanderbilt Park and from Sebewaing to Bay Port. Fish were caught in Wildfowl Bay, but most were small. Walleye anglers were going out anywhere from 3 to 15 miles and fishing in 17 to 28 feet. Success was limited off Finn Road, where anglers were going out 12 miles. Fish were marked out by the shipping channel, but they did not want to bite.

Saginaw River with the warmup this week, ice conditions could change, so anglers should carry a spud to check the ice. Walleye anglers are getting lots of undersize fish but not a lot of keepers. Anglers are fishing the entire system from Saginaw to the mouth in Bay City. Some are fishing multiple access points in one day as they try to find fish that are more active. Most are using jigging raps, lead jigs, small spoons or a single hook with minnows just off the bottom.

Edenville Dam Notice: Due to work on the dam, officials will be bringing down water levels behind the structure. As the water level drops and its velocity increases, the ice will become unstable and could break apart, creating dangerous conditions. The receding water will also expose unstable bottomlands, steep channel slopes, previously unseen debris, tree stumps or other hazards. The area of unsafe ice conditions is between Dale Road and the remaining portion of the dam west of M-30. The public is warned to stay off the ice and the newly exposed bottomlands until further notice.

Tittabawassee River had ice in most areas, but there has been no fishing effort. Caution should be taken above the breached section of the dam due to a water drawdown behind the Edenville Dam, which could lead to shifting and unstable ice both here and on the Tobacco River.

Au Gres: Walleye, whitefish and lake trout were caught near Pt. Au Gres by those heading off Booth Road and Santiago Road and using spoons, tip-ups and jigs in 10 to 20 feet. Perch fishing was hit or miss, with the better catch rates during the week between Hale Road and Sagatoo Road when using jack hooks with minnows in 10 to 15 feet. Inside Eagle Bay Marina, a few pike were taken on tip-ups. Small bluegills, crappie and a few perch were taken on minnows and wax worms. Pike fishing was slow at Northport Marina. Perch and a couple walleye were caught on the south side of the break wall when using a jig tipped with a minnow in 10 to 15 feet. A couple pike were speared as well.

Tawas Area small perch were caught near Access Road when using minnows and wax worms in 10 to 15 feet. Those spearing pike were in 14 to 15 feet. A few anglers caught lake trout and walleye out near the artificial reef in 15 to 20 feet with spoons and jigs tipped with minnows.

Winter is winding down, but there’s still time to go ice fishing. Remember, there are a few important safety precautions to take if you plan to do so: