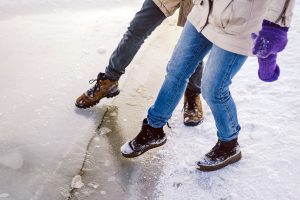 Saginaw Bay had some ice on both the west and the east side; however, it was mainly shore ice so those fishing were in shallow waters only as you cannot get out very far. A few yellow perch were caught at Vanderbilt Park. The warmer temperatures and rain were taking a toll on the ice. Some of the cuts between Sebewaing and Caseville were starting to open up as was the Sebewaing River. The ice at the end of the pier in Caseville blew out. Those heading out need to use extreme caution. Fishing was slow between Sebewaing and Caseville, with very few perch caught. Those looking for pike found a few but overall the action was slow.

Saginaw River had a few anglers catching perch at the Bay Harbor Yacht Club. They are doing lots of sorting and fishing all day to take home 20 or so fish ranging from 7-9 inches. Minnows worked best.

Au Gres Area had several ice anglers were seen at Northport Marina, which is just north of the boating access site. They were doing good on pike when using tip-ups. At Eagle Bay Marina, small perch, bluegill and crappie were caught when jigging minnows and wax worms. A few pike were taken on tip-ups. A few walleye were taken off Whites Beach.

Au Gres River had several surf anglers targeting steelhead down near the Singing Bridge. Most were using spawn bags, but no fish were caught as the water was too muddy.

Tawas Area there was very limited ice fishing just outside of Jerry’s Marina. A couple anglers were targeting pike, but no fish were caught.

Tawas Lake did not have safe ice, and no one was fishing.

Fishing Tip: Targeting walleye? Wait until the sun goes down!

While many anglers pack up their gear and head off the ice after dusk settles in, some anglers will stick it out – especially if they’ve got a lighted shelter. This can be an ideal time to target walleye and to see some angling success.

Many anglers adopt a simple presentation when targeting walleye in the dark – they jig a spoon to catch the fishes’ attention and then offer them a setline with a minnow nearby. Focus on baits that glow to appeal to the walleye’s senses, and keep the minnows small to accommodate their slower appetites.