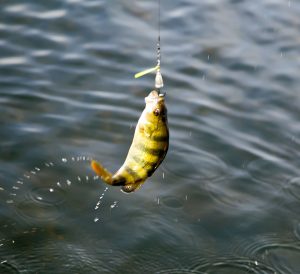 Saginaw Bay west shore #walleyefishing very slow, good news the yellow perch action is picking up. The best fishing was straight out from Linwood; near the old shipping channel and about a mile east of Spoils Island in 17 feet. Getting minnows has been a little bit of a problem, but if you can find them, perch prefer shiners but not golden shiners. Perch anglers off Quanicassee had mixed results, try 6 to 10 feet and move around to find active fish. From Sebewaing to Bay Port, the few boats out looking for perch and walleye had limited results. Walleye fishing slowed throughout the eastern part of the bay.

Au Gres Area #walleyefishing has been slow, with only a few fish caught out near the Charity Islands or south near Pt. Au Gres when using body baits, spoons or crawlers in 15 to 30 feet. Perch were caught in front of the Pine River and south toward the Saganing and Pinconning bars when using minnows in 15 to 17 feet.

Outer Saginaw Bay
Oscoda trout, salmon and walleye were caught when trolling spoons or spin-glo’s in 90 to 160 feet between the river and Greenbush. The odd Chinook and coho were also found. Lake trout were found both on the bottom and suspended, while walleye and silver fish were scattered between 30 feet down and the bottom. Gold, orange, purple, blue and green were hot colors. Pier anglers caught smallmouth bass, rock bass and yellow perch on crawlers.

Au Sable River produced a few smallmouth bass and northern pike caught on crank baits and soft plastics. A couple channel cats were taken on crawlers in the evening.

Tawas Area small perch were caught inside the bay near the weed beds with perch rigs and minnows in 15 to 20 feet. Walleye were caught near buoys #4 and #6 with Lindy rigs or Erie dearies with crawlers. Steelhead and walleye were found out past Buoy #2 in 60 to 70 feet with downriggers and spoons. Catch rates for steelhead have been good. The few targeting smallmouth bass inside the bay and out near the point had released close to 30 fish.

Salmon fishing on the Great Lakes is really hitting its stride, as many species are getting ready to begin their upstream migration.

One tactic that can be particularly useful when targeting Chinook is fishing with glow lures. This species often can be caught near the surface in low-light conditions, and glow lures make that opportunity even more appealing.

Are you interested in targeting Chinook salmon this late summer/early fall? Check out our salmon webpage.