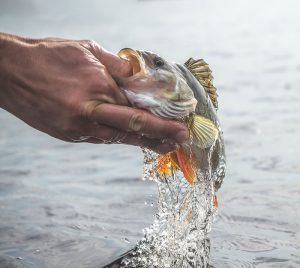 Saginaw Bay #walleyefishing slowed, with only a few caught just north of Pinconning in 17 feet. Yellow perch fishing picked up straight out from Gambles Marina in 17 feet. Average size was 10-13 inches. A few were taken in the old shipping channel. At Quanicassee, perch were starting to be caught straight out in 10 feet with minnows. Though it is still a little early, yellow perch fishing will get a lot better by the end of the month. Walleye fishing on the east side netted 2 to 4 fish per boat, especially between Quanicassee and Sebewaing in 13 to 15 feet and just over the Bar in 18 feet. Those trolling along the Slot off Fish Point in 14 feet caught a couple with a crawler harness or flicker shad. Near Caseville, fish were found in 35 to 45 feet off Oak Point.

Au Gres Area #walleyefishing slowed, but a few were caught out near the Charity Islands and south of Eagle Bay Marina in 15 to 35 feet with crawlers and body baits.

Outer Saginaw Bay
Oscoda boat anglers caught lake trout, steelhead, walleye and the odd coho, Chinook or Atlantic salmon in 100 to 150 feet straight out from the river and north off Greenbush. Fish were also caught further out at Yankee Reef. The thermocline was 70 to 80 feet down, and most fish were taken 20 to 80 feet down. Lake trout were on the bottom and hitting spin-glo’s.

When it’s very warm out, think about where pike will hide – places with cooler water. These spots include along the thermocline (the layer of water between the deep and surface water), where cold-water streams/rivers flow into lakes or around springs.

Look for bodies of water that aren’t densely populated with pike, so the ones there may have a chance to grow fairly large. Also consider locations that have special regulations like size limits.

Lastly, focus on bodies of water that have a good base of fish that pike feed on – particularly other species that prefer cooler water.

Learn even more about fishing for northern pike.