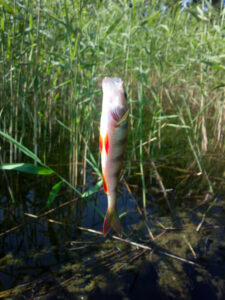 Au Gres Area #walleyefishing was slow. Some perch were caught out near Point Au Gres in 20 to 25 feet of water off minnows. There were a few small perch and bluegills caught off the dock in the Au Gres River while using worms or minnows. There were some good catches of perch out in 15 to 20 feet, southeast of the mouth of the Pine River. There were some small perch and crappie caught off the dock while using minnows or worms.

Outer Saginaw Bay
Oscoda Salmon were starting to move into the Au Sable River. Anglers were mostly catching lake trout, steelhead and walleye. Pier anglers were catching bass, pike, and some walleye, coho and Chinook. Trolling spoons of various colors around 80 to 100 feet of water was the popular method when targeting salmon and trout. Off the pier, common methods for targeting bass, walleye and catfish were floating leeches and nightcrawlers, casting stick or body baits, and the use of drop shot rigs for catfish. While targeting salmon off the pier, the most common method was casting spoons and body baits.

Tawas Area #walleyefishing was slow. Chinook salmon fishing was good on the Tawas River at Gateway Park. Most of the fish were caught off spoons or body baits. There were a few small perch caught on the pier in the harbor while using minnows.

Walleye are thought to be in their best condition in the fall and often can be found in the river mouth areas of larger, inland lakes. They’re gathering there to take advantage of baitfish that like to hang out as the weather cools off. Set your sights on 10-12 feet deep to find these guys.

Perch also populate around these same river mouths, but these fish likely will be much closer to the river than walleye. Check out depths as shallow as 4 feet to find them.

Trout, available in some of these larger lakes during this time as well, can be found in the same areas as walleye and perch.

Try your luck at some great fishing this fall. For more information on the numerous autumn opportunities, visit Michigan.gov/Fishing.