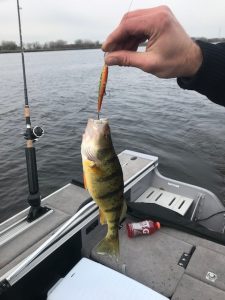 Saginaw Bay yellow perch were caught off the Pinconning Bar in 10 to 20 feet, off Linwood in 16 to 19 feet, in the old shipping channel, at the mouth of the Saginaw River and east of Spoils Island. Quanicassee was slow for perch, with mostly small fish caught in the river. Boats out in the bay were getting a few keepers in 8 to 10 feet. A small number of bluegills were caught in the cuts around Fish Point with a worm and bobber. Largemouth and smallmouth bass were caught in Wildfowl Bay. No walleye were caught.

Au Gres Area had slow walleye fishing, as most have switched over to perch. Good catches, including some limits, were reported out near the shipping channel in 40 to 50 feet and north of the Bell Buoy to Pt. Au Gres. Fish were still being caught near the Pine River, Rifle Bar, Saganing Bar and Pinconning Bar with minnows in 10 to 20 feet.

Outer Saginaw Bay
Oscoda Area trolling body baits, spoons and plugs caught steelhead, walleye and the occasional Chinook or coho in 20 to 60 feet off the river mouth. Chinook, Atlantic and a few pike were caught by pier anglers casting spoons and body baits both morning and evening. A few nice smallmouth bass were caught on minnows. Lots of young gizzard shad and shiners were reported near the river mouth.

Tawas Area boat anglers were marking lots of baitfish. Walleye were caught out past the point and to the south. A couple steelhead were caught when trolling spoons in 40 to 50 feet south of the point. Smallmouth bass were caught out near the Charity Islands when casting plastics, spinners and crankbaits.