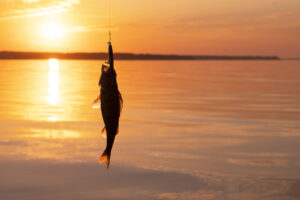 Au Gres Area boat anglers were catching a few walleye north of the bell buoy in 40 to 50 feet of water off crawlers and body baits. Perch anglers were getting good catches of 8 to 10 fish and a few 12 inch fish in front of the Pine River and near the Saganing and Pinconning bars in 10 to 15 feet off minnows. A few largemouth bass were caught in and near the weed beds along the shore of the Pine River using body baits, spinners and crawlers.

Outer Saginaw Bay
Grindstone Lake trout and steelhead were caught in 120 to 140 feet of water straight out from the harbor and to the north while trolling with leadcore, downriggers and copper wire.

Oscoda anglers were mostly catching lake trout, steelhead and walleye. Pier anglers were catching mostly bass with a few occasional walleye and catfish. Trolling spoons of various colors around 80 to 140 feet of water was the popular method when targeting salmon and trout. Off the pier, common methods for targeting bass, walleye and catfish were floating leeches and nightcrawlers, casting stick or body baits, and using drop-shot rigs for catfish.

Fishing Tip: When fishing for trout in Michigan’s rivers and streams – cast into the seams

A “seam” is area where two currents converge, and it looks like a line or bubble trail in the water. Trout like seams because the joining currents create feeding lanes that collect drifting food – insects and larvae.

Before casting, take a moment to read the river and observe structures in the water such as rocks and logs, then locate any seams. With some experience, you’ll be able to detect seams as subtle lines along the surface where slower current meets with fast current, and in the seam is one of the places you’ll find trout!