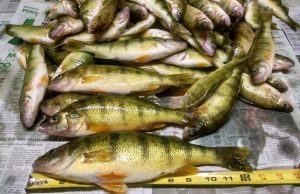 Saginaw Bay Yellow perch were caught straight out from Linwood in 16 feet, the Pinconning Bar in 14 feet, the old shipping channel in 14 to 16 feet and just east of Spoils Island in 16 feet. Average was 10-12 per boat with few limit catches. Perch fishing at Quanicassee was hit or miss. Most were lucky to get four to eight fish after sorting out the small ones. Slow fishing was reported by shore anglers on the Quanicassee River. Off Geiger Road, those who fished long enough could get a few keepers. Largemouth bass were caught in Wildfowl Bay. The smallmouth action was slow. Walleye anglers caught no fish.

Au Gres Area still had walleye fishing, and not many anglers were out. There were some good catches of perch and even a few limit catches taken straight out from the river in 18 to 22 feet and near the shipping channel in 40 to 45 feet. Fish were found near the Rifle Bar, Pinconning Bar, Saganing Bar and in front of Eagle Bay Marina with minnows in 10 to 20 feet. Largemouth bass were caught in the weed beds just off the river when casting spinners and body baits.

Outer Saginaw Bay
Oscoda trollers did manage to catch a couple lake trout, steelhead and walleye, but the fish were scattered. Most were trolling spoons in 40 to 120 feet. Pier anglers caught the occasional walleye, Chinook or steelhead when casting spoons and body baits. Smallmouth bass fishing picked up, and a few nice fish were taken on minnows.

Tawas Area trollers caught a couple walleye near the weed beds around buoys 4 and 6 with crawlers in 15 to 20 feet. Fish were also found out near the point and south toward Alabaster in 20 to 50 feet with spoons and body baits.

Walleye are thought to be in their best condition in the fall and often can be found in the river mouth areas of larger, inland lakes. They’re gathering there to take advantage of baitfish that like to hang out as the weather cools off. Set your sights on 10-12 feet deep to find these guys.

Perch also populate around these same river mouths, but these fish likely will be much closer to the river than walleye. Check out depths as shallow as 4 feet to find them.

Trout, available in some of these larger lakes during this time as well, can be found in the same areas as walleye and perch.

Try your luck at some great fishing this fall. For more information on the numerous autumn opportunities, visit Michigan.gov/Fishing.